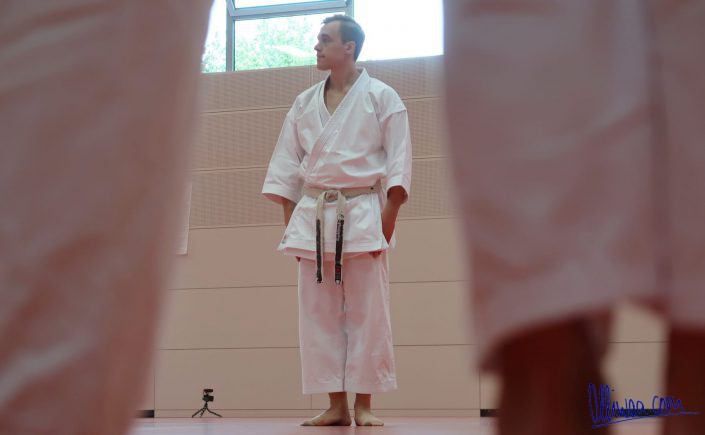 Lucky me, I had the rare chance to attend a seminar with the world famous Karate Nerd™ Jesse Enkamp. Oh dear, my hand still hurts – from taking 19 pages of hand-written notes!

The two-day weekend course took place in the German town of Strausberg near Berlin. It was hosted by “Traditionelles Karate Strausberg e.V.“

When I discovered this upcoming event some weeks before, I had noticed the professional registration process. They used a third party event service I had never heard of before. It allows to embed booking templates on your website, including money transfer, ticket printing and the like. The associated App provides an electronic version of your ticket with QR code, course details and notifications.

If you have ever organized a workshop yourself you might know how tedious all this stuff can be; using spreadsheets to record attendees, sending payment reminders by email and all that… I am definitely going to try it next time I host a seminar. Arigato Gozaimasu Strausberg Karate team for this valuable lesson; and of course your fantastic hospitality!

Study the old, understand the new

The main theme of the seminar (as I understood it) can be summarized as “On Ko Chi Shin” or “Study the old, understand the new”.

As a professional Karate nerd, Jesse Enkamp has spent much time studying traditional Karate in its birthplace: Okinawa. But he is also familiar with modern types of Karate and various other Martial Arts. While Japanese Karate is for self perfection, Okinawan Karate aims at self protection. Refer to following video to learn more about the three Karate types:

So, back to the seminar. The way Jesse Sensei taught the traditional type of Karate was by showing very simple principles that can be applied in many different ways and situations (that’s why they are called principles).

For example we did a continuous hand blocking and counter-attacking exercise. With only four (4) techniques we ended up having 24 different variations. This method was called “Meo-to-de“, literally meaning “husband and wife hands”. Just like the hands of husband and wife that should work together in harmony and not in isolation as it is often the case in modern Karate. Meotode is “a way of maximizing ones strategical advantage in a physical altercation by utilizing both arms equally in continuously attacking and blocking – while keeping your vital bodyparts safely out of the firing line, using the optimal footwork/body movements of tenshin, taisabaki and irimi.” (source: KbJ).

One really cool exercise to train mental and physical flexibility was the task to invent a new Kata. Like in most exercises we were asked to look for a (new) training partner – or “friend” as Jesse sensei always said. Then standing side by side, one partner would start with any free choice Karate technique. The other partner just stood next to it watching. Then it was up to the second partner to repeat the same move and to add another to it. Then the first partner repeated the first two moves and added a third one and so on.

The risk: once you forget a move or mess it up, you lose – a new Kata has to be started from scratch. According to Jesse, he used to do this exercise with the national team with up to 50 moves. Well, we were happy with five or six. My training partner came from a different style. Some of his techniques were new to me and vice versa. So, nice challenge 🙂

To add even more spice, Jesse frequently changed the rules. For instance, every Karate stance was only allowed once; or we had to move into another direction than our partner in his previous move. Or both rules combined…This is probably what Jesse sensei means by Gamification.

Focus of day two was Gamaku, the connection of the upper and lower body. Without going into detail, this session consisted in breathing, stability and specific Kihon exercises. It was a very enjoyable session and a reminder why I love Karate so much. It is the depth and holistic approach that you rarely see in other (trendy) kick-and-punch martial arts .

The more I think about it the more I feel that the real theme of this seminar was not old versus new – On Ko Chi Shin. It was the connection. Connection of tradition and modernity. Connection of hands and feet, defense and attack, upper and lower body, chest and belly breathing, body and soul. Jesse sensei managed to connect small puzzle pieces to a story – and: to connect people! Fun, laughter, smiles. What more can you expect?

This semainar fascinated on two levels.

The first level is related to the content. Principles, ideas and small pieces of wisdom shared by Jesse Enkamp are enough food for the coming months. For those who attended: remember the cup of tea…

The second level is about the details around the seminar: Organization, atmosphere and the way Jesse conducted the course. A great part of my notes circle around the “how”.

I could go on for hours reporting about “falling wood”, gravity, economy of movement, going with nature etc., but this should be it for now. If this made you curious and you ever get the chance to train with Jesse Enkamp – go for it! No matter the style you practice, how old you are or which rank you have – you won’t regret. And for sure, the kids who attended loved it, too…

Speaking of youngsters, Jesse Enkamp who is still under 30 is living proof that talent and intelligence of young people should never be underestimated.

Oh, and by the way – the title of this article…

One of first exercises was a fighting based warm-up game where we had to try and open the knot from each other’s belt and take it off. Not easy if your opponend tries to fend you off and is after your own obi.

Eventually, two volunteers were asked to demonstrate together with Jesse how this exercise works with three people. Everyone against everyone.

This is when the Karate Nerd asked me to steal his belt.