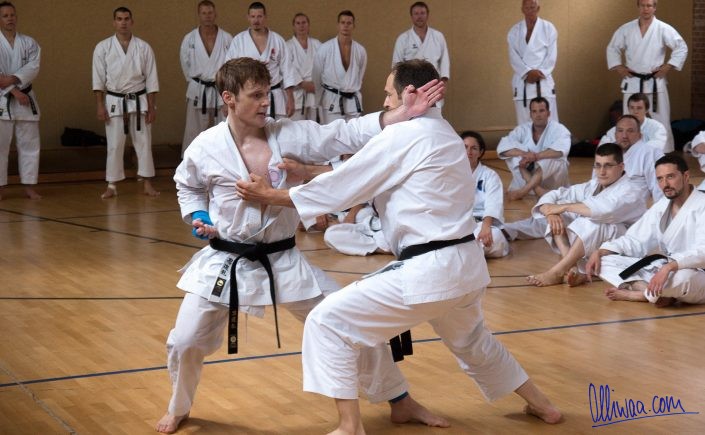 The internet is full of brand reviews, product tests and device unboxings. Their objective is to help consumers to navigate through a jungle of product choices and to answer the simple question: is it worth buying or not?

In this article I will try this concept on a human. André Bertel is a world famous Karate master from New Zealand and I will let you know whether hosting him for an international seminar or a one-on-one training in Japan would be a clever choice or not.

However, two things have to be made clear right from the beginning. Firstly, it will be a highly biased endeavor as the “product” is actually my dear friend. Secondly, my female readers will be disappointed since the unboxing part shall be omitted and left to Bertel sensei’s wife Mizuho.

Who the f*ck is André Bertel?

For those one or two Karate-ka who do not yet know him, here is a short summary. André Bertel was forced into Karate by his mother when he was five years old and he hated it. Only when he received his first Dan he started liking Karate as he believed to have achieved something useful in his life and more interesting doors started to open. Apart from that he is:

Bertel sensei promotes traditional Budo Karate of Japan and his mission is to keep the legacy of his late teacher Asai alive. According to him, the Karate practiced worldwide is often a watered down version of the original, a mere sports activity. Karate should instead be studied in a way that develops a genuine Samurai fighting spirit, allowing self-defense in a life-and-death encounter.

What does this mean? Of course, it has to be assumed that applying empty hand weaponry like Karate comprises a minimum level of chance for survival. Fighting against machine gun bullets is obviously doomed to fail, no matter how much and hard one has trained before.

We are talking about lunatics on drugs or some moron whose mental circuit breaker has tripped. Recall those infected people in “28 Days Later” who turned into blood thirsty running zombies? Picture one or two of them heading in your direction.

It’s exaggerated, yes, but the point is that an out of control, freak-style assault is the benchmark, not the friendly sparring partner in a cosy Dojo.

[..] the context of karate is ‘civilian empty-handed self-defence’ [..] Karate is not an art for warriors or professional fighter’s—and it never has been—rather, it is a martial art ‘for the average person’ who needs reliable skills to repel an attack on the street.*

*see sensei’s blog article “Why ‘CHUDAN’ so much? A bigger picture“

Other than my mother tongue German, with only one word for “Kampf”, the English language differentiates between fight and combat. The first one is for the Dojo with rules and fair play, the second being the ugly street variant with no rules, no moral and lots of dirty tricks. Everything forbidden in sports Karate is what constitutes a combat. In a fight you might get bumps and bruises or a bloody nose. In combat you get raped, stabbed or beaten to death.

This is important to understand in order to grasp the underlying concept of Budo and the type of Karate that André sensei studies and teaches. It aims at surviving rather than winning points.

That being said, even in a training environment following mindset applies:

Any technique or fancy Kata application that cannot be used in free fight (Kumite) and against a non-compliant partner is not real.

Having experienced very dirty situations as a bodyguard, and looking back on a successful tournament career, André sensei certainly knows what he is talking about. He has seen both sides, Sports and Budo, and he appreciates both. With a Budo background it would be very possible to become a successful competitor and to enjoy the challenge. For someone purely focused on Sports Karate on the other hand, it would be difficult to go the other way. Movements and techniques may be fast and look superficially nice but not losing one point and not losing one life are very different objectives. Accordingly, the techniques of Sports Karate-ka usually have little substance to deal with a real threat.

During his first seminar in Ahrensburg, Bertel sensei asked a disillusioning question:

To expand on this a little more, I remember having asked sensei once about his view on new trends in Karate like the addition of Kyusho Jitsu. His diplomatic reply was consistent with the before-mentioned thinking. It would be useful as a supplement. Sensei compared vital point striking with being a sniper. The problem is you have to be very precise and if you are under extreme stress and miss, you could be in deep trouble. A person on drugs won’t feel pain and continue to finish you off. Budo Karate on the other hand is like a nuclear bomb. If you blast your enemy away you no longer have to worry about targeting the right meridian.

We could go on with anecdotes and personal stories that André sensei shared with me about how Karate got him out of trouble and saved his life several times. But I won’t as it is too personal.

To summarize this chapter:

The essence of Karate is Ichi-geki hissatsu – one strike, certain death.

This is André Bertel’s Karate. No, this is Karate!

You might now think that André sensei must be a ruthless terminator, combined with John Rambo and Chuck Norris.

This couldn’t be further from the truth. My wife and I got to know him as a very humble, polite and caring person who loves bad jokes, mucking around with friends and enjoying life. And he’s a great entertainer, too. Spending a bad or boring time with André is technically impossible!

Imitating film Anti-Heroes like Borat, or turning from Mr. Bertel into Indian English speaking Mr. Patel is no challenge for him. Whilst cruising around by car, he once started to Gangsta Rap. His daughter and my son on the back seat couldn’t stop laughing. He loves kids and they love him.

Furthermore, I have had the honour and pleasure to spent many hours, sometimes from dusk till dawn, enjoying wine and beer with André sensei. We engaged in political and philosophical discussions of all kinds, or spoke about “God and the world”, as we say in Deutschland.

Having organized three seminars with André Bertel in Ahrensburg (Germany), and having attended three more workshops with him in Venice (Italy), Blackpool (England) and Krefeld (Germany), I would conclude that these events are an out-of-this-world happening. It is likely that you will be electrified watching sensei demonstrate extremely fast muchiken (whip hand), koshi no kaiten (hip rotation), tai no shinshuku (compression and expansion) and other specialties designed to down an opponent with a single blow. It is a jaw-dropping experience and the amount of energy in the room is beyond description. That is, I believe, why the number of attendees increases each time. We started with 30 people when Bertel sensei was not yet so well known in Europe, next time we counted 60, then 90, 120, 200,…And usually Karate-ka arrive from all over Europe, travelling long distances from 11 or more countries so as not to miss the event!

It is possible to get a taste via YouTube but only live and in real-time will you understand the magic.

Let me now draw your attention to the amount of content covered in a gasshuku. It is huge! And to be honest I learned and remembered most when cutting the (olliwaa) YouTube videos. Due to literally over a hundred hours of footage that piled up over the years I was able to review the details again and again. Also, the many private lessons in our lounge, garden, at the metro station, inside Starbucks, at the Airport check in counter, in-front of Ahrensburg castle, in the forest, in our Dojo and in many other locations, helped a lot. But for someone without this (unfair) advantage it would be challenging to sort and hold everything in their mind.

So, please make sure you bring a notebook and jot down as much as possible while your memory is still fresh. This, by the way, is exactly what sensei does when attending a seminar himself. I would also strongly recommend to actively reflect on the material at home. This kind of study is not for easy consumption!

On a side note, wouldn’t a Budo Karate book by André sensei be a nice thing? I would love to buy one…!

André Bertel sensei lives in Oita City, located on the island of Kyushu, Japan. There he offers private tuition for individuals and small groups. A dream! Sensei would reserve a training hall just for you and cover any aspect of your choice. Without going into detail: this man is a genius. Ask him why in a particular situation you always lose balance – and after checking your technique he will ask you to slightly adapt here and to modify a little there. Sometimes it only takes millimeters of correction and you change from being a wobbly pudding to an immovable rock.

A visit to monkey mountain in Beppu or sensei’s secret outdoor Dojo, which is also the ideal spot for great photo shootings, will make your trip perfect.

In 2009 my wife Yan studied Asai sensei’s Kata Suishu (Waterhand) via YouTube, just out of personal interest. A Karate friend of ours from Hongkong, a student of Asai Tetsuhiko, pointed her in the direction of André Bertel. Maybe he could answer some of my wife’s questions about Suishu. Yan contacted André via Facebook and to her surprise, he answered. After many rounds of chatting my sweetheart asked sensei whether he would like to come to Germany for a seminar and, more importantly, teach her the Kata first hand. He was interested and a few months later he and his lovely wife Mizuho arrived in Hamburg, where both stayed in our home for the next 3 weeks. Since that time we are close friends.

I am happy that the type of Karate, which André sensei promotes, attracts more and more fans each year. Due to some health conditions, I cannot follow the path of Budo Karate as much as I would love to. Nevertheless, I learned to appreciate it during my time in China (read article here) and through my mentor and friend, André Bertel. He opened my eyes and re-programmed me. Therefore I will do all I can to make advertising for him, be it via YouTube videos or this article.

At the same time, I cannot deny you the fact that sensei polarizes. His refusal to compromise when it comes to Budo Karate has burnt many bridges, as he openly admits. Plenty of comments below his videos testify this. But you know exactly what you get and if you don’t like it, you are free to walk away. And some people will. They come to his seminar once and never return. Others become loyal students who won’t miss a single chance to meet him.

We can note that even his strongest critics admit that Bertel sensei is one of the best and knowledgeable Karate masters in the world.

His unique selling point is that he knows Asian and Western mentality in equal measure and is able to moderate between the two worlds without effort. In his seminars or private sessions he would give insight into a Karate that is practiced only behind closed doors in Japan. Something you will rarely see with Japanese masters. This, combined with a contagious humor and an easy-to-talk-to personality are major ingredients to his worldwide popularity.

Not everyone will be interested in Budo, nor accept that it requires a completely different mindset than Sports Karate. But if you want the real deal: André Bertel is your man.